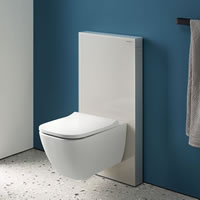 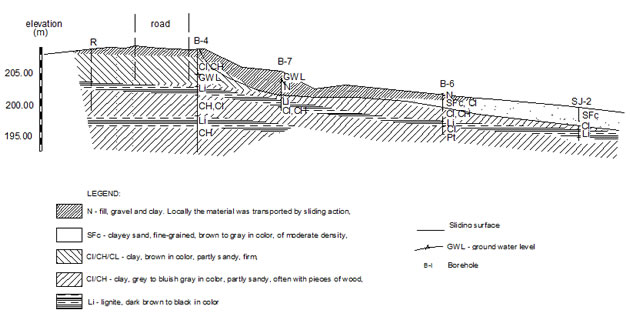 Detailed geotechnical investigations were conducted in order to define subsequent landslide improvement activities. The stability of surface clay formations is negatively affected by the structure of soil, highly disturbed by tectonic activity, and an unfavorable action of ground water. An additional negative influence is human activity. Waste material has been dumped at the edge of the slope for quite a long time.

These factors are the principal causes of slope destabilization and road damage. As normal road traffic is currently impossible, measures were taken to determine the exact cause of instability and to prepare the design solution for improvement work. The first step was to determine relationships in subsoil. This was followed by geotechnical modeling, geostatic analyses and selection of technical solutions for remedial activities. The solution selected in this process will further be developed in the course of subsequent design.

The landslide is located on the national road D-31 near the village of Kravarsko in Croatia. It was activated before 1990 and initial improvement activities, undertaken in 1995, proved unsuccessful so that the landslide further extended and affected the neighboring terrain. About 2.5 hectares of land are currently disturbed by an active sliding process.

The road stretch measuring about 100 m in length is affected at the face of the landslide, with depressions ranging from 2 to 4.5 m in depth. From there, the landslide spreads down the slope and ends some 200 m away from the frontal zone. The slope is relatively flat (<10º). Evacuation channels along the road are almost completely destroyed, and the portions that are still in use actually bring water to the zone affected by landslide.

The program of geotechnical investigations was based on visual inspection of the terrain. The engineering geological properties of the terrain were determined by geological and engineering geological mapping of the landslide zone, and by analysis of boreholes that were drilled in zones estimated as actively affected by the landslide. In the past, the entire slope had been affected by various instabilities in form of slide and creep.

Seven boreholes ranging from 5 to 16 m in depth and two investigation pits each 5 m in depth, were drilled at this landslide. Piezometers were installed in five investigation pits in order to monitor ground water level variations. The detailed soil identification and classification was performed in situ. Standard penetration tests were also performed in the boreholes. Disturbed and undisturbed soil samples were taken for laboratory testing.

The lignite attracts water and the latter accumulates in the lignite layer and flows from the area of higher potential to the area of lower potential. Due to tectonic discontinuities in lignite formations, the water passes through lignite, reaches discontinuities and exerts pressure on the impermeable clay layer (as can be seen in the soil profile 2-2, Figure 2).

The exploratory drilling in the landslide zone pointed to the presence of clay formations. These clays can be classified into two types. Brown clays, usually situated closer to ground surface and near the embankment, constitute the roof of the area under study. These clays are mostly of low to medium plasticity. The other type of clay, gray to bluish-gray in color, is characterized by medium to high plasticity. These formations are often sandy, with lignite pockets.

According to consistency, these clays can mostly be classified as firm clays except in southern portion of the landslide where soft clays were registered. In addition to clay, sand layers were also registered in the studied area. The sand is of moderate density, brown to gray in color, and often clayey.

The landslide is of shallow type. The exploratory drilling revealed areas identified as sliding zones. The depth of such zones varies from 2.4 to 4.1 m and coincides with the clay and lignite contact zone. The sliding surface passes through soft materials, mainly fill and clay formations overlying the lignite layers.

The stability was calculated according to Spencer method using the software program GEO SLOPE/W. The soil model was prepared in accordance with geotechnical investigation results (prognostic soil profile, shear parameters for soil, ground water level and other data), and an appropriate slope stability analysis was conducted.

The general sliding surface was analyzed on the portion of the road embankment affected by instability. The cohesion was determined for the selected residual angle of internal friction, and the safety factor of approximately 1.0 was applied. Results obtained by stability analysis prior to improvement work are presented in Figure 3, while results after improvement work are given in Figure 4. 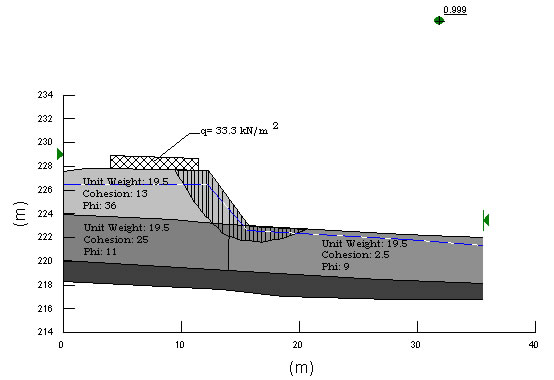 Several technical solutions were proposed for landslide improvement on this project. The principal matters of concern were elimination of negative water pressure, and stabilization of pavement structure by establishing firm contact with the underlying load bearing lignite layer. Solutions were reached in consultation with the Client, taking into account technical, financial and environmental aspects of the proposed improvement. Three alternative solutions for road embankment stabilization were considered.
All alternatives involved realization of a drainage system for the collection and evacuation of water from the lignite layer. This had to be done in order to reduce pressure imposed on surface clay formations.

The first alternative is based on the reduction of road embankment height in the length of 230 m. The maximum height in the central part would be 3 m. Such relaxation of load imposed on slope would result in the increase of road grade which would in turn decrease the quality of traffic, although the road would remain within allowable limits for this road category.

The second alternative involves realization of a sheet pile wall, by which the load would be transferred to deeper bearing layers of soil.

According to third alternative, the road load would be transferred to lignite by embankment made of reinforced earth. In its central part, the embankment would be 9.3 in height, while its height would be 6.4 m at the sides, so as to follow lignite occurrence in soil. The embankment would be made of 5 – 9 steps, each 50 cm in height. The geotextile was selected as a reinforcing material.

After consultations with the Client, the decision was made to adopt the third solution, and it is on this basis that the landslide improvement design was prepared. In all three alternatives, the precipitation and seepage water is collected using an appropriate system composed of open channels and inlet structures, and by excavation of drains down to lignite layer. Landslide improvement operations were completed in early 2004.

The instability of soil is often related to spatial disposition of materials characterized by different mechanical properties, permeability characteristics, and stability in contact with water and atmospheric influences. All this combined with traffic load, human activities, negative action of water and weather, and sometimes tectonic influence, may eventually result in the loss of stability, which is evidenced in form of collapse, sliding or creep of terrain.

When identifying causes of such loss of stability, it is highly significant to carry out detailed and extensive investigations. Good quality investigations enable establishment of proper geotechnical models and realization of adequate geostatic analyses, which is the basic precondition for selection of appropriate landslide improvement activities. On landslide improvement projects, care must be taken to properly harmonize the solution adopted at the design stage with actual conditions prevailing during remedial activities. 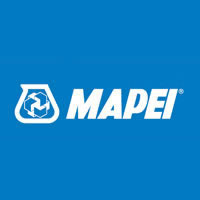 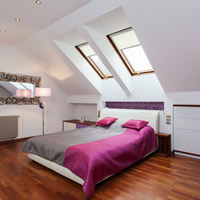 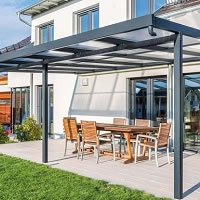